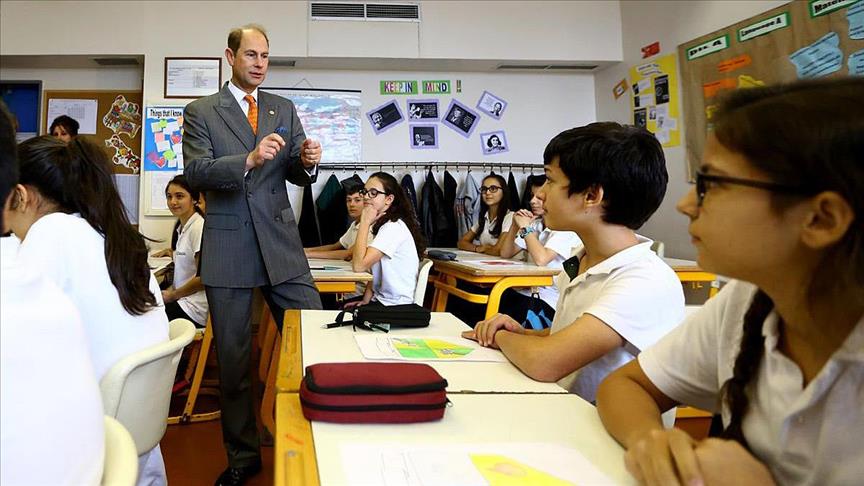 A senior member of Britain's royal family paid a special visit to Istanbul’s only school for orphans on Thursday.

Prince Edward, 51, was at Darussafaka Education Institutions in the province’s Maslak district to attend the Duke of Edinburgh’s International Award Program.

Turkey first hosted the U.K. awards program – which encourages educational achievement and citizenship – in 1995; Darussafaka has been member of the scheme since 2005.

Prince Edward thanked the people who organized the program and congratulated children who won awards.

During his speech, the Prince told the assembled children to seek opportunities: "Life is full of challenges, we know that, but it is also full of opportunities."

He also thanked local educators for their help to develop children's characters and their individual skills: "You are all ambitious for the young people you work with."

The prince, who is the head of several children's charities in the U.K. – including the National Youth Theatre of Great Britain and Creative Youth – had been invited by the Turkish Human Resources Education and Health Foundation (TIKAV).

Principal Nevzat Kulaberoglu described the school – which has almost 1,000 male and female pupils, aged between 10 and 19 – as a unique institution in Turkey.

Kulaberoglu said Darussafaka, since joining the Duke of Edinburgh scheme in 2005, had seen 281 students already graduate from the scheme.

According to M. Talha Camas, chairman of the school board, the institution also provides special support to the children outside of their education, with training for sport, culture, art and literature.

Camas told Anadolu Agency that they gave education to those children who had an unfortunate start to life.

Prince Edward spoke with some children and had a tour of the school, which includes Darussafaka Museum, Fatin Gokmen Observatory and Fatin Gokmen Planetarium.

Founded in 1863, Darussafaka school has provided learning to orphans through their secondary and high school education. As a non-profit institution, it needs donations to survive.